The ghost of Christmas dinner, past, present and future 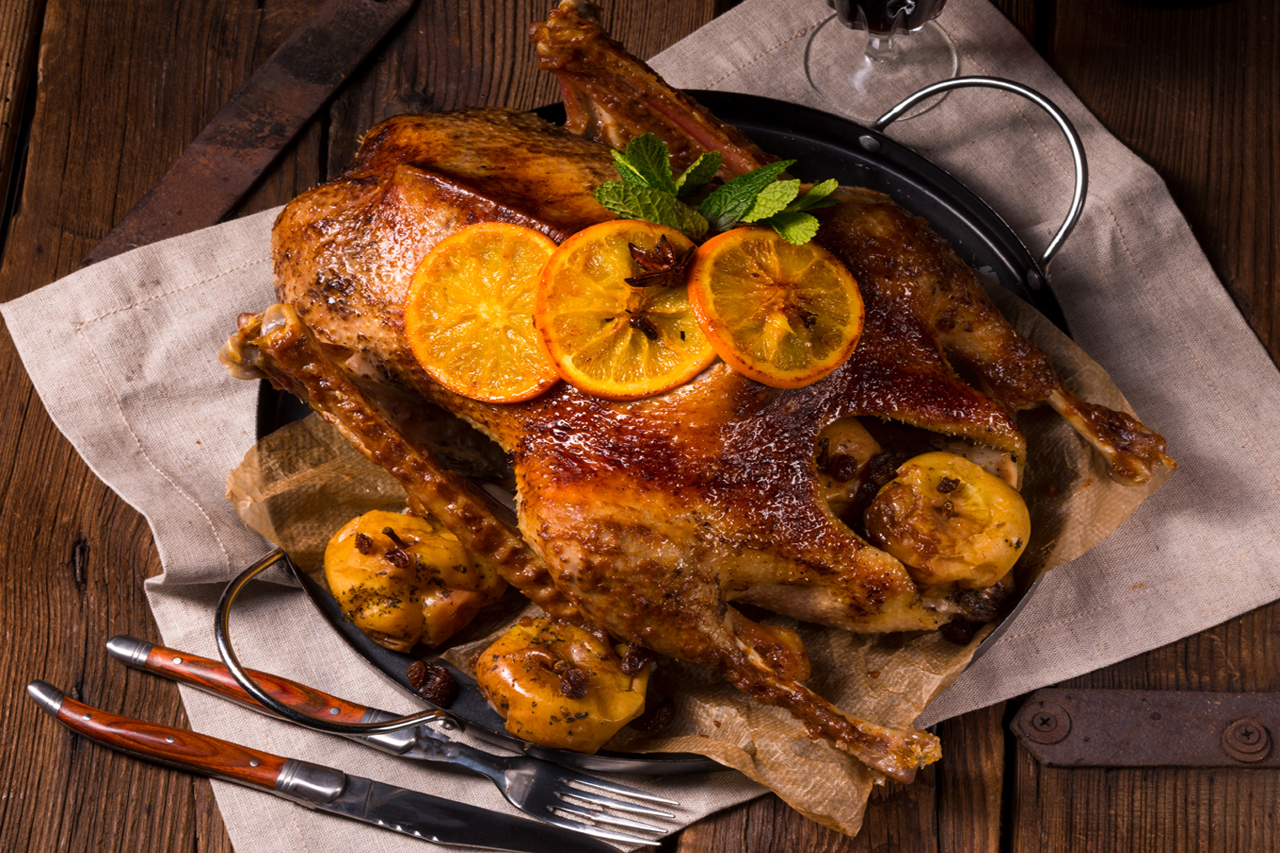 We all know what Christmas dinner’s about don’t we? Roast turkey, roast potatoes and all the trimmings, including those (Brussel sprouts, roast parsnip) which nobody would ever bother about during the rest of the year. Oh, there might be the occasional variation – nut roast for the vegetarians, cranberries used in various innovative ways and whatever Nigella suggested in her last series – but Christmas dinner has always been exactly the same hasn’t it? And that includes the jokes in the crackers.

Well, like many ‘traditional’ British concepts (things like respecting the Royal family for example) the standard Christmas is actually a fairly recent invention, at least within the larger sweep of history. Take a look back in time and it’s clear to see, from surviving menus and recipe books, that the banquet set before yuletide revellers during the medieval age, for example, was vastly different from what we’re due to sit down and enjoy in a couple of weeks. Bearing that in mind, it’s also worth spotting the more recent additions to the standard Christmas table and predicting just what we’ll be sitting down to eat in the company of the ghost of Christmas future, when our paper hats are actually holograms and the roast turkey was produced from scratch in a laboratory (only one of these suggestions is actually a joke).

The standard Christmas is actually a fairly recent invention, at least within the larger sweep of history.

When considering the kind of Christmas feast which used to be served up in the past, it’s surely best to go back to where it all started, which is to say Bethlehem. Back then, of course, Christmas day was known as ‘That bloke who was born in the cattle shed’s birthday’ (not really, lest that cast doubt upon the rest of the historical revelations contained herein), and a typical Christmas dinner might consist of any or all of eggs in sour cream, fresh green salad, gingered prunes, spiced cider, Persian cream ring and ginger cakes.

By medieval times things were beginning, in some respects, to resemble a meal we might recognise today. As with most aspects of mediaeval life, the key factor was not what year it was or whereabouts in the world you were, but rather the vital issue of whether you happened to be a stinking peasant or not (that’s not an insult, even the King stank back in mediaeval times).This was when the big roast bird started to put in an appearance, generally in the form of goose or woodcock or, if you were lucky enough to get permission from the King, a swan. The rich would also tuck into venison for Christmas dinner with the less palatable bits – heart, liver, tongue, ears and brain – collectively known as ‘umbles, being tossed to a passing peasant for them to bake into an ‘umble pie. Hence the traditional saying ‘Don’t bother, I’ll get a pasty from Greggs’.

By the time we reach restoration England, the Christmas feast served in a household wealthy enough to really go for it was spectacular enough to make the modern version look like a model of restraint and moderation. Listing an entire menu surviving from the year 1685 would take the rest of this page, but highlights include oysters, stewed broth of mutton marrow bones, a pottage of caponets (me neither), a swan roast, a haunch of roasted venison, a dish of chickens in puff paste, two geese, two capons and a turkey. And that was just the first course. (That’s not a joke, either. The second sitting included most of the edible cast of ‘The Twelve Days of Christmas’, a dish of larks, sturgeon and powdered geese jellies).

In recent years the three bird roast has begun to make an appearance on more Christmas tables, consisting of a turkey rolled around a duck and then a pheasant, before being stuffed with pork, or a goose combined with a chicken and a pigeon. Clearly, if we presented this to one of our ancient ancestors it would seem less like a wild extravagance and more like an hors d’oeuvre.

Looking to the future, many experts predict that every house will soon own its own 3D printer.

Looking to the future, many experts predict that every house will soon own its own 3D printer, and that this will be used to ‘print out’ an entire Christmas dinner downloaded from the chef of your choice. There are two flaws with this vision. One is that the chef of the house working themselves into a red-faced frenzy of stressed out incoherence is as much part of the fun of Christmas day as putting up with an ageing uncle who keeps making offensive remarks and then telling you not to be so PC. The other is that domestic 3D printing is one of those things – like jet packs and genuine hover boards – which always seems to be just a few more years down the track. Further into the future, scientists making doom laden predictions based around the collapse of world farming and the need to turn to eating insects for our protein (a perennial favourite which has yet to make it any further than the bush tucker trials), foresee a time in which all ‘meat’ will be produced in the laboratory, the fish course will consist of genetically modified ‘superlobsters’ or a tasty plate of smoked jellyfish and the jokes in the Christmas crackers will still be the same. Whatever the ghost of Christmas future is cooking up for us, we here at Cuckoo have already booked a seat at the table and are set to tell the world all about it. And that includes the fact that Brussel sprouts will still not actually taste very nice.

Need help spreading the word of your brand? Get in touch on 0161 660 8352 or email Jennifer@cuckoodesign.com – we have lots to talk about!